The psychiatrist Eric Berne, conceived the theory of Transactional Analysis as a way of examining a person's relationships and interactions with others - “transactional” referring to verbal and non-verbal interchanges between people.

Berne also came up with the concept of life script, referring to a set of childhood decisions made unconsciously, that were influenced by the verbal and non-verbal messages received and as an attempt to adapt to the environment at the time, in order to survive. Some of these messages, experiences and adaptive behaviour affect our perception and interpretation of the world around us.

Life scripts can have a deep and unconscious effect on our adult lives and often remain fixed, even though they may have become ineffective or even damaging, unless considerable effort is made to change these beliefs and adapt to current circumstances.

The aim of transactional analysis psychotherapy is to bring into awareness, explore, challenge, and change an ineffective life script. Whether you're in business, a professional, a social worker, a parent or someone who strives to achieve personal development, Transactional Analysis theories, is considered to be one effective method of enriching and enhancing your relationships with others and oneself.

Frank Ernst further developed Berne’s idea of a life script, into the OK matrix, sometimes known as the ‘OK Corral’ or ‘life positions’.

Life Positions refers to the attitude towards self and others that an individual adopts on the basis of certain experiences and assumptions made in their childhood - like a set of glasses through which we see the world. The OK Matrix helps us analyse how our life position affects the way we relate to or transact with others as well as how others transact with us.

There are four life positions described by Ernst – these are:

·       I’m not OK—You’re not OK; short for "There is something wrong with me and also with other people – they wrong in some way too."

Have a look at the diagram and think about your general stance in life. You may have a preferred position that you revert to or you may have a tendency to move around the matrix, depending on influences and experiences from situations and circumstances of that life has chucked at you. Your life position may be most obvious in your intimate relationships, because that's where the stakes are highest. 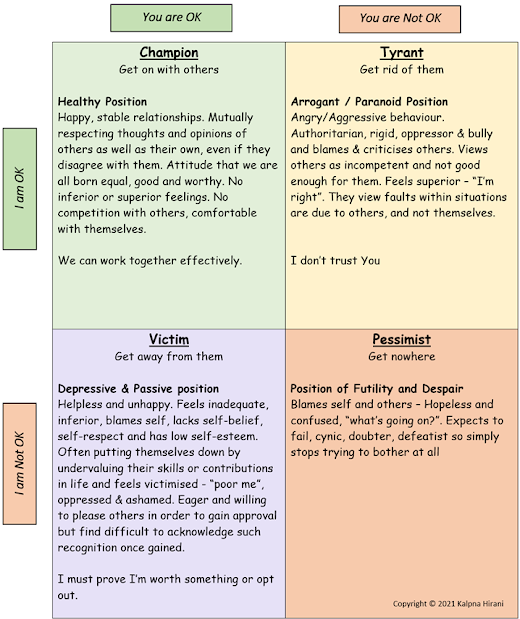 The Japanese concept of finding happiness We all want to be happy but many of us have no idea of what to do to achieve happiness. Should we focus on making money or pursuing our passions? Some people desire objects and money, others feel dissatisfaction at the relentless pursuit of material wealth and fame and are driven to achieve something “bigger”. Missing something! One of the mistakes I’ve made in my life was believing that if I had money, that would provide me with happiness and a contented life. That’s one of the few reasons why I chose a career in finance. But the result was an existential frustration that stemmed from conflicting desires. I always felt I was missing a certain something that I could not put my finger on. My husband has always followed “his bliss”. His ethos is “find your passion - what brings you joy, and don’t be afraid to follow it”. That made me wonder and motivated me to embark on my own journey of exploration and I began to reflect on my “ikigai”
Read more

Shinrin-Yoku We all recognise that being outdoors makes us happy. It may come as no surprise that happiness and well-being are important factors which help protect against mental and physical disorders. But did you know that being outdoors is actually scientifically proven to aid in improving many mental and physical diseases and can even mimic medications for those ailments? Researchers at King’s College London found that being outdoors, seeing trees and the natural sunlight, hearing birdsong, spotting the blue sky and feeling in contact with nature increases our feelings of wellbeing (1) . Numerous such studies has helped us understand that we have certain neurotransmitters that we need to keep in balance for our wellbeing, such as:  Serotonin – our “happy hormone” Serotonin is a natural mood stabiliser. Its effect in the brain could be considered a “starring role” in the body. Serotonin is that transmitter that is all about making us feel positive, energetic
Read more